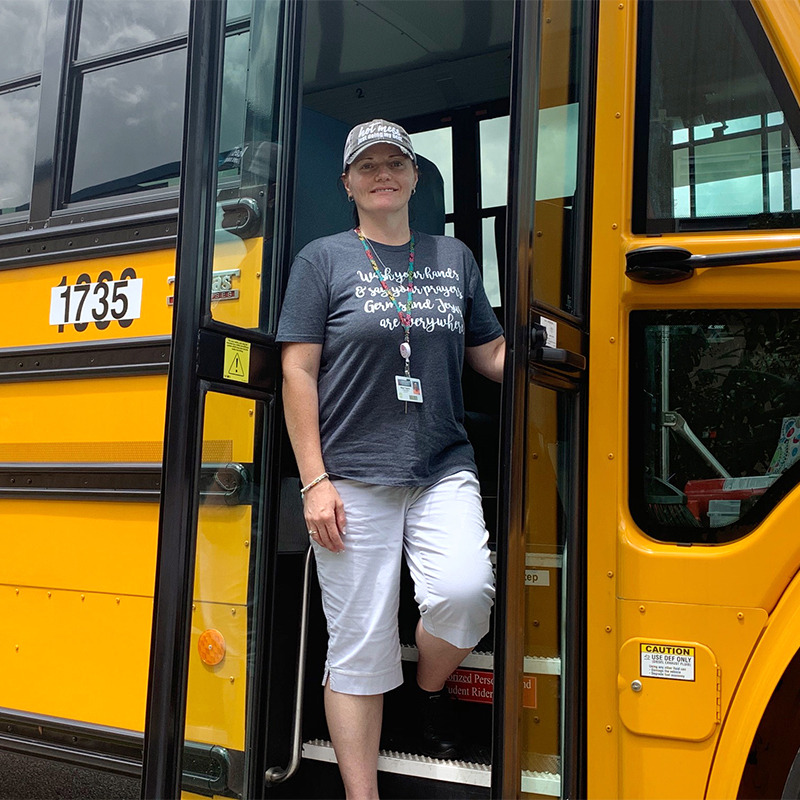 Polk County Public Schools bus driver Margie Yzaguirre calls the children she transports “her babies,” and on Friday, she reacted just as a mother would when a criminal tried to climb on board.

“The school bus driver was a hero,” said Polk County Sheriff Grady Judd. “She kept the doors locked. She didn’t let him in when he ran up to the vehicle.”

It was a little after 6 a.m. on Friday, and Yzaguirre had just picked up her first student of the morning. About that same time, she noticed a man in a pickup truck, driving erratically along Old Polk City Road in Lakeland.

“He was swerving really bad all over the road,” she said.

In the seconds that followed, the man crashed his truck, walked down the middle of the road, and approached the school bus.

“He comes to my student door. He has blood dripping down his arm, and he starts banging on the doors to get in,” Yzaguirre said.

Frightened as she was, Yzaguirre stayed calm. She refused to open the doors, motioned to the man to get away from the bus, and used her radio to call her dispatcher, who alerted law enforcement.

“She reacted exactly in the way we would want a bus driver to react in that situation. She kept the safety of her students in the forefront of her mind,” said Rob Davis, PCPS’ assistant superintendent for support services. “She did everything right, and we’re extremely proud of her.”

After walking away from Yzaguirre’s bus, the man jumped on two other cars, then broke into a nearby house, where he was shot and killed by the homeowner.

On Friday afternoon, Yzaguirre was running through all of the “what-ifs” of the incident.

Her normal pickup time for her student was 6:14 a.m., but Yzaguirre had just changed it to 6:05 a.m. to save her from being late to her next run.

“What if I hadn’t made that change?” she said. “The student could have been standing alone at the bus stop when all this happened.”

And what if the man had been able to get on board?

“If he would have gotten on the bus, I would have done everything in my capacity to protect my student,” she said, “even if that meant putting myself in harm’s way.”

The parents of the student — Carson Hughes, who attends Lake Gibson High — said it is reassuring to know their child is transported by someone like Yzaguirre every day.

“When I heard about it, I was extremely grateful for her reacting as quickly as she did,” said Carolyn Hughes, Carson’s mother. “I feel very safe with my child being with her every day. I’m grateful to her.”