Shashwat Bansal remembers being a kindergartner playing chess with his father and not wanting to lose the match.

“Nobody ever won a chess game by resigning,” his father said.

Now a senior at Bartow IB, Bansal, 18, said he continued playing chess over the years because it’s a fun and challenging game that inspired him to make self-discipline and a strong work ethic part of his personality.

“It helps you focus,” he said. “It forces you to concentrate, perform under pressure and make quick decisions.”

In the Polk Scholastic Chess program, Bansal is one of many Polk County students who are learning valuable skills and life lessons while putting their classmates into checkmate.

Polk Scholastic Chess introduces children from pre-kindergarten through high school to the benefits of playing chess. The nonprofit organization began 31 years ago and is made possible with the help of parents, coaches and high school student volunteers.

The scholastic chess tournament is the largest of its kind in Florida. Players include public, private and homeschooled students, all competing in a supportive environment.

“This year, we had 672 registered players from over 55 schools in Polk County,” said Malay Shah, president of Polk Scholastic Chess.

Through chess, students can see a powerful, positive impact in their education, Shah said.

“We have repeatedly seen the progress of students who play chess and their improvement academically,” he said. “The game is an exciting way to teach critical thinking skills, sequencing, sportsmanship, self-control, and many other skills important for academic growth and development.” 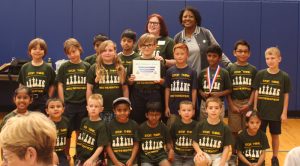 Superintendent Byrd with the chess team from Lincoln Avenue Academy

“Thank you to the students who participate, the parents and coaches who encourage and teach, and the volunteers who organize and run the chess competition,” said Miller, the district’s curriculum specialist for accelerated programs. “Chess is an excellent opportunity for our students to stretch their mind, compete and practice good sportsmanship.”

A registration fee of $35 allows a student to play in all tournaments for the academic year. Registration must be done online at PolkScholasticChess.com.