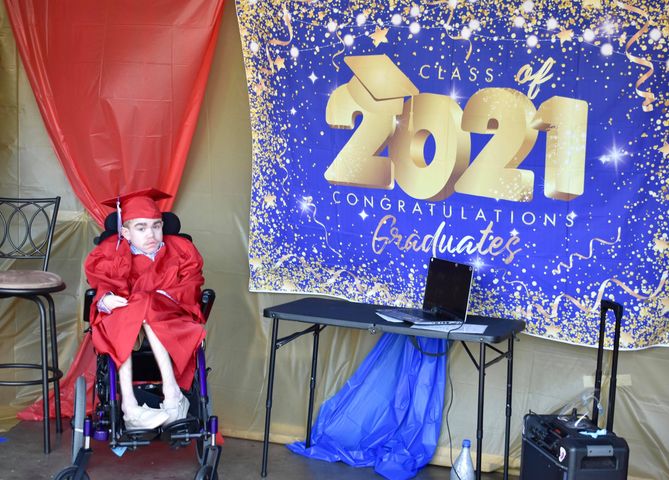 Thousands of Polk County students will experience graduation in the coming weeks, but Jordan Ostwalt already had his special day.

It was last Wednesday, to be exact. Family and friends gathered at the Ostwalt home in Lakeland as Jordan officially became a member of the Class of 2021. There was even more cause for celebration: It was his 15th birthday.

Jordan is a former student of Doris A. Sanders Learning Center but has spent the past few years in PCPS’ Hospital Homebound program. He suffers from Sanfilippo syndrome, a rare genetic condition that causes fatal brain damage; most patients never reach adulthood.

Jordan lost his sister, Whitney, to the same disease about three years ago. He’s currently in hospice care.

With so much uncertainty in his life, Jordan’s family wanted to see if he could have an opportunity to graduate and earn his diploma.

“Honestly, to make it to 15 with the disease he has, it’s not unheard of but it’s pretty rare,” said Nicole Ostwalt, Jordan’s mother. “You don’t want to plan something like this (graduation) with the hospice team, but we did.”

Gail Smith was quick to get involved. Smith, a facilitator with PCPS’ Hospital Homebound program, reached out to district officials to review Jordan’s options. They determined that he could receive an honorary diploma, and ordered a cap, gown and tassel to make the experience complete.

“It was all top notch,” Smith said. “I didn’t even know it was something we could do until we started exploring this … It was really a pleasure for me and our department to facilitate it.”

Everything came together last Wednesday.

Superintendent Jacqueline Byrd, joined by district staff and some of Jordan’s former teachers, gathered for a Zoom call to recognize Jordan as an honorary PCPS graduate. Dr. Joshua Lutz, the district’s assistant superintendent of learning support, visited the Ostwalt home in person to present Jordan with his diploma. Good Shepherd Hospice organized a car parade to mark the occasion.

“It was overwhelming to be part of it,” said Gail Smith, who participated in the Zoom call. “Just a heartwarming event. I don’t know if anyone watching had a dry eye.”

Nicole Ostwalt says she could not have imagined a better celebration for Jordan. Reached by phone today, she described herself as “kind of speechless” while thinking about the amount of love and support that everyone has shown for her son.

“Truthfully, he probably had the best day I’ve seen him have in forever,” Nicole said. “He watched everything, he was laughing, smiling. I could just look at him and tell he knew it was his day.”