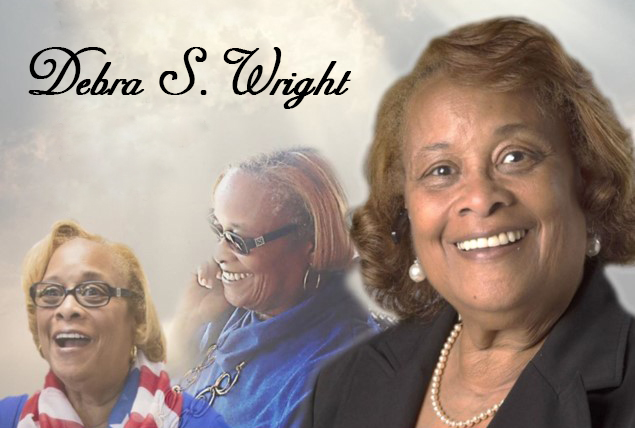 When Debra Wright Hudson and Ashlee Wright think about their mother, the same image comes to mind: Her at the piano, playing Mozart, gospel hymns and Christmas carols.

“She was a true talent — in so many ways,” said Wright Hudson, acting principal of McLaughlin Middle School and Fine Arts Academy.

Wright’s mother, Essie Mae Jackson, worked as a house cleaner in Lakeland, but even on her tight budget, she insisted that Wright take classical piano lessons.

“My grandmother was not a musician, but she saw music as a foreign language, a language that is international and crosses all socioeconomic barriers. She also knew that learning music would instill discipline that would help my mother throughout her life,” Wright Hudson said.

“My mom grew up in a time where African-Americans rarely learned to read music, but she could switch from reading Mozart to playing gospel music by ear.”

Wright would go on to stand out not only musically, but also as an educator and community leader.

In 1970, Wright graduated from Lakeland High as a member of the school’s first integrated class. She went on to study at Florida Memorial College, earning a degree in music education, and Rollins College, where she completed her master’s and specialist in education leadership.

Wright began her career as a music teacher at North Lakeland Elementary and Griffin Elementary, but even from her first days in the classroom, she had her sights set higher.

“In my family, every generation is required to do better than the generation before,” Wright Hudson said. “My grandmother instilled that in my mother. She would tell my mother that she was scrubbing floors so that one day she could be a principal.”

To broaden her teaching experience, Wright transferred to Winston Elementary, where she taught third grade. Her students included Ray Lewis and Desmond Clark, both of whom went on to play professional football. Later, she became principal of Socrum Elementary.

As a principal, Wright demonstrated a remarkable ability to rally community support, mentor new administrators, and to improve the performance of struggling schools. The latter earned her the position of regional administrator on assignment in Broward County, where she oversaw turnaround schools. After retiring as an education consultant in 2007, Wright served as a member of the Polk County School Board.

For Wright, education was also a family business. Her husband, Clint Wright, was an area superintendent for Polk County Public Schools before becoming superintendent of Lake Wales Charter Schools. Wright’s other daughter, Ashlee Wright, is the founder of New Beginnings High School, a charter school that serves students struggling with poverty, language barriers or other challenges.

Combined, Debra and Clint Wright were an unstoppable force, their daughters said.

“My mother was a phenomenal writer and businesswoman. She understood systematically how to address a problem,” Ashlee Wright said.

“My father was the ultimate people person. He was the ultimate communicator. He had an emotional intelligence unlike anyone I’ve ever met. My dad was the relationship builder and my mom, who was also an avid researcher and reader, would teach my dad the new things she learned.”

Both Debra Hudson Wright and Ashlee Wright channel their mother daily in their own work in education.

“My mother gave me the greatest gift that any mother can give. She gave me a spiritual inheritance. She gave me God,” said Ashlee Wright.

“In her teaching me who and what God is, I have been able to do what I need to do, despite whatever issues I might encounter. You can’t work with students and teachers without demonstrating love, patience and wisdom.”

One of the memories that stands out most for Ashlee Wright was when she was riding in the car with her dad and she asked who he thought was the best principal in Polk County.

What made her mother so successful, Ashlee Wright said, was this simple formula for success, which she often shared with her daughters and the administrators she mentored: Have your priorities in order and be consistent in addressing those priorities.

And for Debra Wright, the priority was always the students.

“Every time I see the (PCPS) ‘Students First’ logo, I think that it really captures my mom’s passion for education,” Debra Wright Hudson said. “I know she didn’t coin that motto, but it’s what she stood for. We have to build the students and prepare them for the next wave of challenges they will face. We have to put the students first.”

With their mother gone, Ashlee Wright and Debra Wright Hudson said their work takes on new meaning. Now, it’s a tribute to their mother as well as their father.

“My mother has prepared me to carry on her torch, to be an advocate for those who don’t have a voice,” Debra Wright Hudson said. “She has instilled in me to be the change in education.”

A visitation for Debra Wright is scheduled for Oct. 21 from 3 to 6 p.m. at Williams Funeral Home in Bartow. The services will be private.

In lieu of flowers, the family is requesting that donations be made to the Clint Wright Foundation, which provides scholarships to students enrolled at Florida Memorial University. Donations can be mailed to P.O. Box 1486, Eagle Lake, FL 33839.