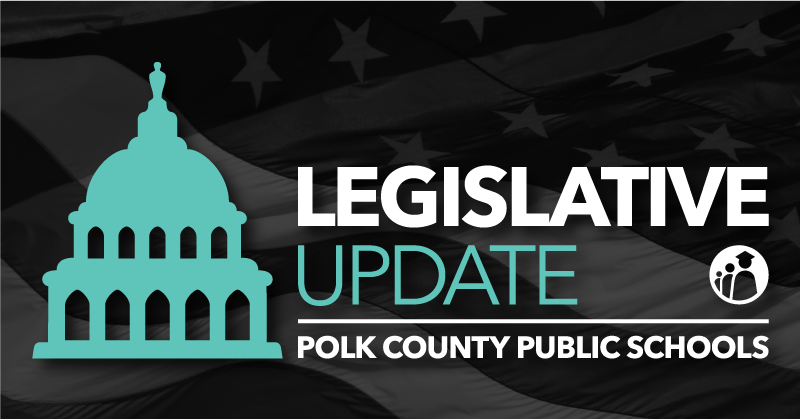 Turnaround schools and a multimillion-dollar impact to the district’s budget are the subjects of legislation Polk County Public Schools is closely watching as lawmakers enter their last three weeks of session.

“Both pieces of legislation would directly impact our students and employees,” said PCPS Director of Legislative Affairs and Policy Wendy Dodge.

“We’re working hard to make sure lawmakers know the potential outcomes of the legislation they’re considering, because those outcomes would be significant.”

The Florida Retirement System needs more money. To get it, a pair of bills, SB 7044 and HB 5007, require agencies participating in FRS to increase their contributions.

School districts would be on the hook for an additional $233 million, more than all other state agencies, colleges and universities combined.

“The only place we can go to cover that cost is our base student allocation (BSA) — money the state provides for every student in our district. The other funding we receive is all categorical, meaning it has to be spent for specific purposes. The BSA is our only source of flexible money, so to cover this new, unexpected bill, we would have to draw from the BSA,” Dodge said.

In their proposed budget, the Senate increases the BSA by $40, and the House proposes an increase of $50.

“That would be like your boss giving you a $40 per month raise but saying you have to spend an additional $75 per month in uniforms. You’re still $35 in the hole,” PCPS Chief Financial Officer Michael Perrone said.

Lawmakers are being encouraged to either allocate additional money to cover the cost being passed on to school districts, or spread the increase out over several years.

House Bill 7079 calls for numerous changes related to the turnaround process for struggling schools. Among the most significant: Districts would receive funding that specifically benefits struggling schools — known as the Turnaround School Supplemental Services Allocation (TSSSA)— only if they’ve entered into a contract with an external operator.

“This would be extremely problematic for us,” Superintendent Jacqueline Byrd said. “It would hinder our ability to provide the supports that our schools need to get out – and stay out – of turnaround status.”

A school that receives two consecutive grades of D enters what is known as district-managed turnaround, a local plan for raising the school’s grade to a C or better.

Once the school is on its second year of district-managed turnaround, it is required to select one of three options for the school’s future: close the school, turn it into a charter school, or hire what is known as an external operator to help manage and improve the school.

PCPS, like many districts across the state, have opted for the external operator option.

To help with raising the grades of struggling schools, districts receive TSSSA funding. TSSSA money can be used for anything from hiring math and reading coaches to paying staff members to provide extra help to students after school — whatever would best support that specific school.

“What HB 7079 is doing is specifically tying our TSSSA money to external operator contracts,” Byrd said.

A recently approved amendment to HB 7079 attempts to alleviate financial constraints on the district, but doesn’t go as far as the companion bill, Senate Bill 1498, which does not include TSSSA language at all.

“What we’re trying to do right now, and what the public can help us do, is communicate with our lawmakers that we should not be locked into using TSSSA dollars on external operator contracts,” Dodge said.

“We need to be free to use TSSSA money to support our schools in the ways that will most benefit the specific school and its students. Every school is different and has different needs.”

The same bill, as well as its companion in the Senate, also shortens the amount of time before a school enters turnaround status from two years with a D to one year. That would further strain the district’s resources to help those schools.

Both the district and the Polk Education Association (PEA), the union that represents teachers, paraeducators and secretaries, are working to change that language.

“If HB 7079/SB 1498 pass both Chambers in the current forms, the law will drastically change how high school grades are calculated and could accelerate schools into turnaround status. These sister bills would also grant the Florida Department of Education, primarily the Commissioner of Education, more latitude to take over schools should they fall back into D or F status after coming out of turnaround status during a three-year term. These bills have the potential to be detrimental to our fragile schools and our district, so all stakeholders must stay engaged as these bills move through committees and onto the floor,” said PEA President Stephanie Yocum.

To view both bills in full and monitor their progress, visit myfloridahouse.gov and flsenate.gov.

Members of the public interested in contacting their local representatives on these or any issues facing public education can find contact information at polkschoolsfl.com/legislative.