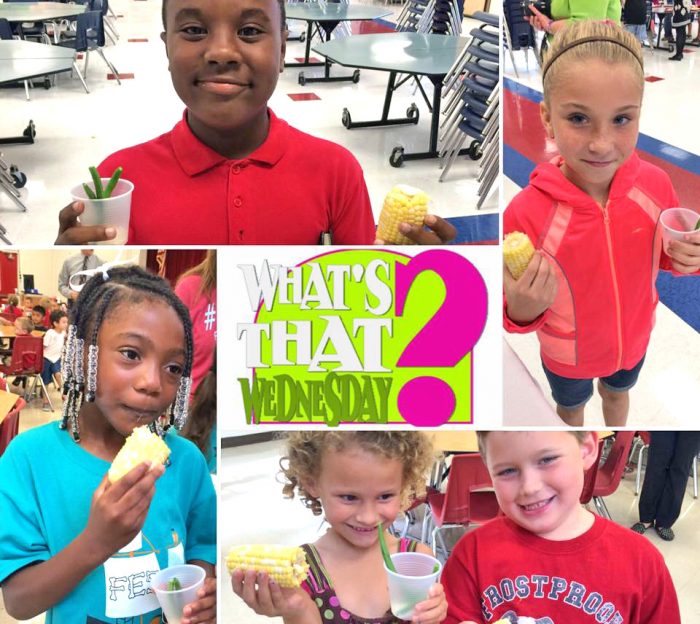 Carrots and hummus, radish dip with crackers, fresh tomatoes and cucumbers. This may sound like the appetizer menu at your next social gathering, but in fact, these delicious and healthy snacks are being served in the cafeterias of Polk County Public Schools.

In addition to serving up 65,000 lunches and 32,000 breakfasts each day, school nutrition staff began using taste testing about ten years ago to educate students on fresh Florida produce. Additional items were added to lunch menus in snack-sized portions, and students were encouraged to try these new fruits and vegetables, which included strawberries, corn on the cob and green beans. The program later expanded to more diverse items such as cilantro, edamame, dragon fruit, cranberries, kumquats and bok choy.

A few years ago, after the taste testing became a regular occurrence at schools one Wednesday each month, a staff member came up with the idea to call the program “What’s That?” Wednesday.

School Nutrition Director Jenna Kaczmarksi is extremely proud of the initiative. “We want the taste testing to be a safe way for kids to try new foods, because they may be reluctant to pick up a full serving when going through the lunch line. Each year we were trying to come up with new items, and we started adding some rare items — not because we thought students would necessarily add them to their normal diet — but we hoped it would help them be brave about trying new foods in general.”

Even though it is not mandatory, most schools find value in participating in “What’s That?” Wednesday, and staff enjoy introducing students to new and healthy food choices. Some schools have even been known to use fruits and vegetables from gardens maintained by students on campus.

Linda Jones, school nutrition manager at Eastside Elementary, said her students love the information board she displays each month that explains what the new food items are and where they come from. The biggest hit at Eastside was a passion fruit and frozen strawberry yogurt recipe. Coming in at a close second was the day students had a chance to sample star fruit.

Student participation in “What’s That?” Wednesday at Auburndale High has increased significantly the past few years. School Nutrition Manager Amy Perkins says, “We do not have any leftovers after the taste testing, and I have students coming back three or four times for more.”

Kaczmarski tells her staff that they are teaching students how to choose healthy meals while at school, with the hope that they take those lessons with them into adulthood. “They may not appreciate that we make them put a fruit or veggie on their tray now, but later on when it becomes second nature to them to make sure that every meal contains a healthy fruit or vegetable, they will reap the benefits.”

So what’s next for “What’s That?” Wednesday? This school year, students will be lining up to sample pumpkin, Brussels sprouts, sweet potato, basil, papaya, and bell peppers. As Kaczmarski puts it, “You don’t know you like something until you try it!”