McLaughlin Middle Presents “The War of the Worlds” … on Zoom

McLaughlin Middle Presents “The War of the Worlds” … on Zoom 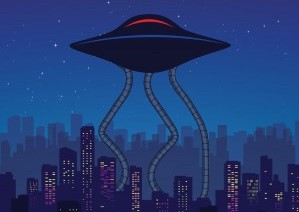 We have received reports of unidentified flying objects headed toward the Polk County area, expected to make landfall tomorrow and Friday (May 20-21) at 6:30 p.m.

According to our sources at McLaughlin Middle School and Fine Arts Academy, the UFOs are piloted by extraterrestrials of unknown origin. Their intentions are unclear. Local officials are hoping for a friendly encounter, but residents are asked to prepare for emergency scenarios.

We could be facing … “The War of the Worlds.”

McLaughlin Middle will debut a special online presentation of the classic science fiction story tomorrow, and it should be a unique experience. In a nod to Orson Welles’ 1938 radio broadcast of “The War of the Worlds,” the McLaughlin version will leave much to the audience’s imagination.

Billed as a “Totally Teen Online Theatrical Event,” the adaptation being staged by McLaughlin is presented via Zoom video conference. The premise: a high school’s morning news program is interrupted by the crash landing of an unknown object on campus. Calls begin to pour in from other students as the show’s hosts find themselves covering a live alien invasion.

Each “caller” is actually a McLaughlin student performing from home, offering new details and eyewitness reports of the invasion. The callers appear on screen via Zoom’s Active Speaker View function, resembling a remote TV news interview.

“We don’t see the alien invasion ourselves, but we hear about it through what they’re seeing,” says Alexandra Wilhite, McLaughlin’s theatre director. “The story unfolds as we meet these new characters.”

Wilhite said this Zoom-ified take on “The War of the Worlds” created an opportunity for her students to perform while schools are still operating under COVID precautions.

“I really wanted to bring a piece of theatre (to the community) after a year without it,” she said. “Theatre is taking a really big hit, and I want these kids to feel and experience the thing I’m so passionate about.”

Wilhite is a first-year teacher who comes from a community theatre background. “The War of the Worlds” will be her first production as a teacher, and she notes that many of the cast members are novice performers.

“I have thoroughly enjoyed this process,” she said. “I wouldn’t have wanted to do this with any other group.”

Wilhite also said she hopes the story will have special meaning for audiences during the pandemic era, as it touches on the idea of people coming together to face a mysterious threat.

“The themes are very relevant in today’s world,” she said.

“The War of the Worlds” will be presented free of charge on Thursday, May 20, and Friday, May 21 at 6:30 p.m. Viewers can access the show on Zoom using the meeting ID# 936 766 7330 and passcode “theatre03.” Viewers can also access the show using a Zoom link (and same passcode) that will be posted to the McLaughlin Middle Facebook page and Instagram account on the day of each performance. 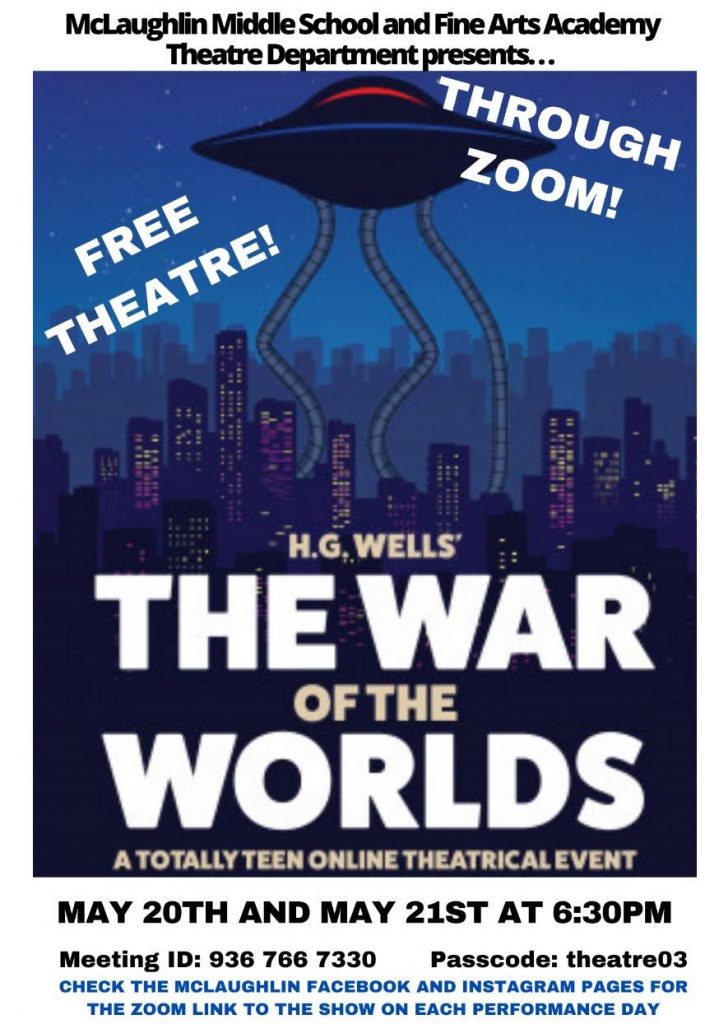