We spent a little time playing in the dirt today as we broke ground on a new gymnasium at McLaughlin.

The gym is one of many exciting projects at McLaughlin, which has traditionally served middle school students and is gradually expanding to include a high school. Construction on the $15 million gym will begin next month and is scheduled for completion in June 2024. The 28,300-square-foot facility will host a variety of McLaughlin athletic programs and also serve as a meeting space for the school and community, as well as a hurricane shelter.

We were delighted to be joined by a very special guest today: Lake Wales native, McLaughlin alum, and retired NBA star Amar’e Stoudemire. Although McLaughlin did not have a basketball team during Stoudemire’s time at the school, he was known to have played on the courts there. In honor of their famous former student, McLaughlin administrators are retiring Stoudemire’s No. 32 jersey, which was the same number he wore during the early part of his NBA career. 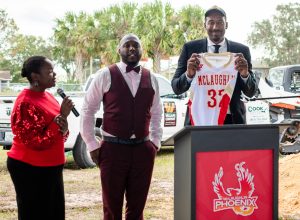 McLaughlin’s new gym is the latest project made possible by Polk County’s half-cent sales tax, which was renewed by voters in 2018. 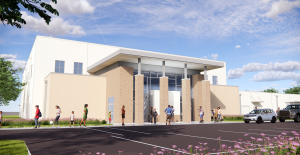