“He is the best friend a guy could ask for,” Clark said of Hall. “We’re basically like brothers. I could never imagine that we would have this longtime bond and friendship, and it all began with Polk County Public Schools.”

Growing up, they were next-door neighbors and went to preschool together at Lake Shipp Elementary. They graduated from Lake Region High, and were even roommates at the University of Central Florida. 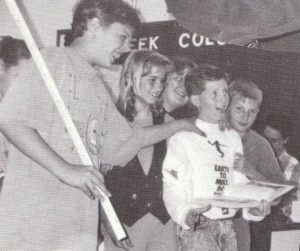 After college, Clark began serving as a PCPS teacher. Hall became a manager of a retail store. They remained close friends, participated in each other’s weddings and supported one another as they became fathers.

In 2007, Hall was looking for a career change, and got some inspiration from his old friend.

“I saw the difference that Robert was making at Elbert Elementary,” Hall said. “It gave me the inspiration that teaching might be a career I could pursue, too.”

For more than 10 years, they’ve been working alongside each other at Elbert Elementary. Currently, Clark is a behavioral interventionist, and Hall is a fifth-grade science teacher. They’ve also served as ESE teachers.

“I’ve been blessed to have them here,” said William Dawson, Elbert’s principal. “They love to teach children, and enjoy cracking jokes. It’s nice for students to see these positive male role models on campus. They and the rest of my staff help create a very enjoyable atmosphere at school.”

Clark and Hall, both 39, describe their school as a “big family” filled with supportive colleagues. They enjoy when former students come to visit.

They also can’t help but look at the students sitting in their classrooms and wonder which friendships will stand the test of time.

“I think about that all the time,” Clark said. “That’s what we hope will happen with our students: We hope they will forge strong and lasting friendships that continue through the years.”