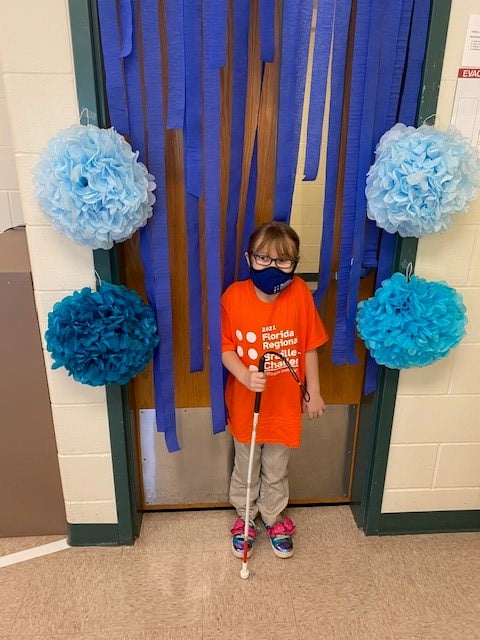 It was a proud day for Horizons Elementary last month when second-grader Harper M. took part in a unique academic competition.

Cheered by fellow students and staff, Harper became an official contestant in the Braille Challenge, a nationwide event that tests the braille literacy skills of students who are blind or visually impaired. As part of the Challenge, she successfully completed a battery of spelling and reading tests at Horizons while a proctor observed.

Harper was encouraged to enter this year’s Braille Challenge by Anna Whitman, a PCPS teacher who travels throughout the district working with students who are visually impaired.

“Braille is quite difficult for a young child to learn, so anything we can do to get them excited is a good thing,” Whitman said.

Harper has nystagmus, a condition in which rapid, involuntary eye movements make it difficult for her to see. Whitman says that Harper is able to see hand movements, but has limited ability to read print, so the duo practice braille and other skills about two hours every day.

Whitman coached Harper to help prepare her for the Braille Challenge.

Although Harper didn’t make it to the advanced rounds of this year’s challenge, Whitman said she performed admirably.
“She’s just learning, and braille is very complex … I was just excited that she finished,” Whitman said. “I would imagine she’ll do it again next year.”

Whitman said Harper also enjoyed the support she received from others at Horizon. On the day of the Braille Challenge in February, school administrators wished Harper good luck during the morning announcements, as students clapped for her in class.

Harper was thrilled to recount the moment to her teacher. 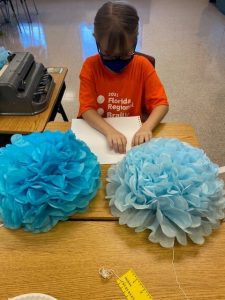