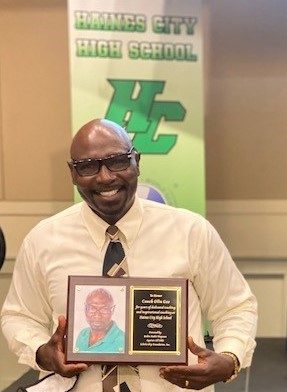 The weightlifting building at Haines City High will soon be named in honor of Olin Gee — the school’s longtime coach, mentor and educator.

A retirement ceremony for Gee was held on March 11, hosted by the City of Haines City. Friends, family, coworkers and former students expressed their appreciation for his dedication to the community’s youth. He was also recognized with a proclamation from the mayor of Haines City declaring it to be “Coach Olin Gee Day.”

“This was a big surprise,” said Gee. “It felt great to know that you are appreciated for the things that you do. I’ve just always enjoyed helping kids, watching them grow and choose a path in life. I’m happy to have a hand in guiding them along.”

Gee was presented with a plaque, which will be hung inside the weightlifting building. A dedication will be held at a later date.

Gee, who retired in January, served 37 years with Polk County Public Schools. Twenty-seven of those years were spent at Haines City High teaching physical education. He also served in various coaching positions at the school, including football, track and weightlifting.

His wife, Linda, a business education teacher at HCHS, also retired in January after serving about 25 years with PCPS.

“Olin Gee and his wife spent many years serving Hornet Nation, and they have been a positive influence on all of our students,” said Principal Adam Lane. “We wish them peace and happiness during their well-deserved retirement.”

The naming of the weightlifting building is being sponsored by the Robin Nable Wagman Against All Odds Scholarship Foundation, Inc.