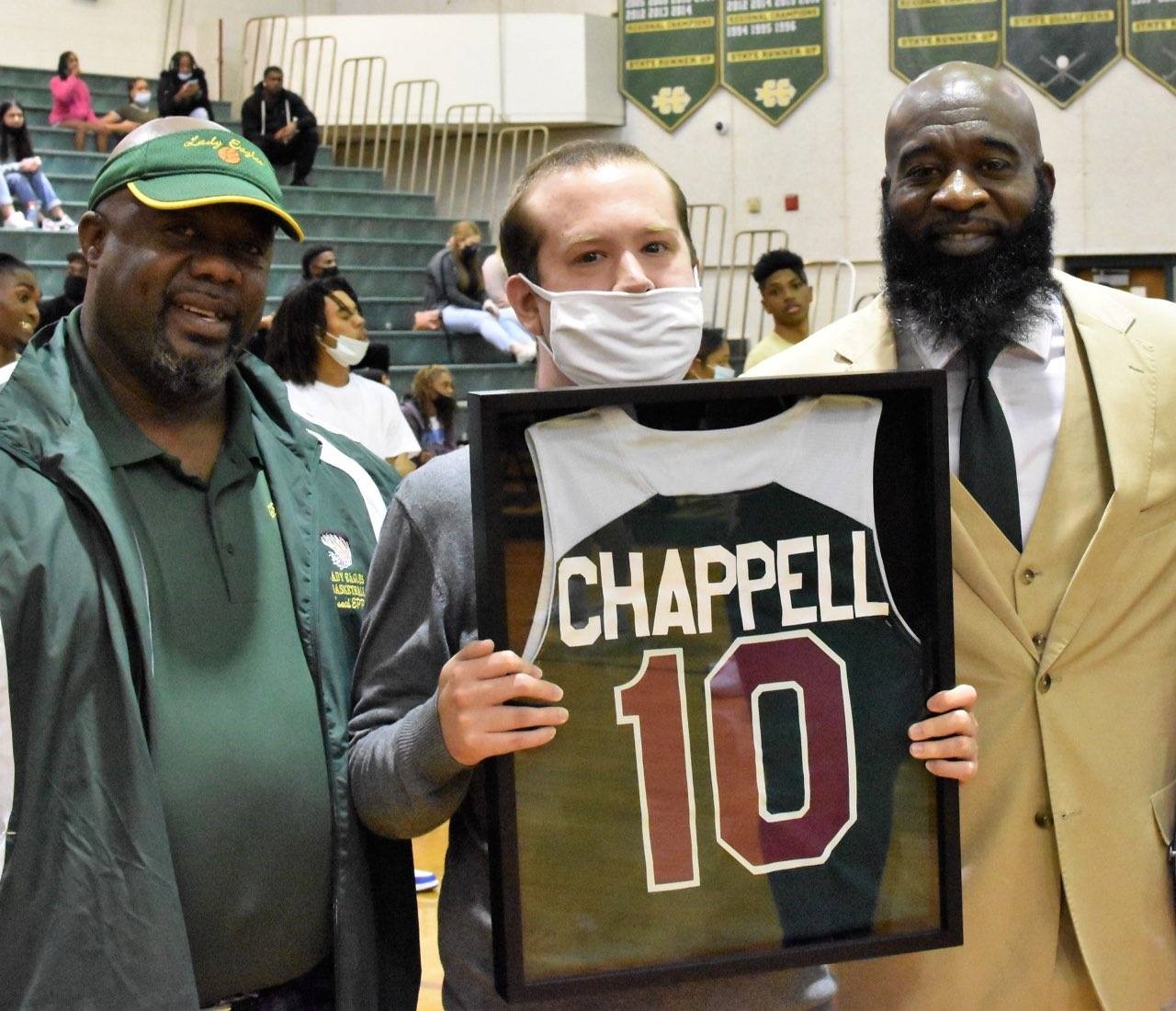 Evan Chappell will soon be leaving George Jenkins High, but he’s already picked out a place on his bedroom wall for a special memento from his alma mater.

Earlier this month during senior night, classmates cheered as Evan, 21, of Lakeland, received a framed personalized basketball jersey — a tribute to his hard work and perseverance in the school’s Transition program.

PCPS’ Transition program serves students with special needs up to the age of 22 as they defer their high school diplomas to continue their studies, and learn valuable life and employment skills. Evan will exit the program when he turns 22 in June.

“He loves school,” said his mother, Karen Chappell. “We are really sad that his days at George Jenkins are coming to an end. He really does well with the structure and support there.”

Evan has been a familiar and pleasant face on campus, where he helps with the school’s recycling program.

“He is very personable and very likable,” Karen said. “He learns everybody’s name and likes saying hello to them.”

She said Evan will more than likely enter an adult day treatment program or participate in vocational training; the goal is to continue building his life and employment skills. But no matter what the future brings, he will look back with fondness at GJHS, particularly the bonds he formed there.

He developed close relationships with coaches Marcus Ghent and Raymond Epps. Both men have served in the role of paraeducator, providing one-on-one supervision and assistance to Evan.

Epps continues to work as Evan’s paraeducator at GJHS, while serving as a football coach and an assistant coach for girls basketball.

Both men attended the jersey presentation on Feb. 4, celebrating Evan’s determination, positive demeanor, and strong work ethic. Over the years, they’ve enjoyed watching Evan master many useful skills, such as folding his clothes, using computers and improving his ability to communicate with others.

“That’s my boy right there,” Epps said. “He’s come a long way and matured so much. I’ve grown very fond of him. He’s just a person that you want to be around. It will be sad to see him moving on, but I’ll be staying in touch.”

Ghent also happily recalls his three years as Evan’s paraeducator. The two did so much together — tackling class work, taking walks around campus, talking with people, playing basketball and tossing around a football.

“We were inseparable,” he said.

Ghent, who now works as a school safety guardian at Scott Lake Elementary, continues to serve as the head boys basketball coach at GJHS. He wanted to do something special to honor Evan: He always wanted him to be on the basketball team.

“Senior night was a perfect solution,” Ghent said. “We celebrate our young men who will be graduating. I give each player a jersey, and there are speeches expressing not only my pride in the work that they have done on the court, but in life as well.”

“I wanted Evan to know how much he meant to me and always remember his time with me at Jenkins. He will be missed on campus by many, but none more than me.”