Establishing Culture and Building Up Students: It’s a “New Era” at McLaughlin Middle

Establishing Culture and Building Up Students: It’s a “New Era” at McLaughlin Middle 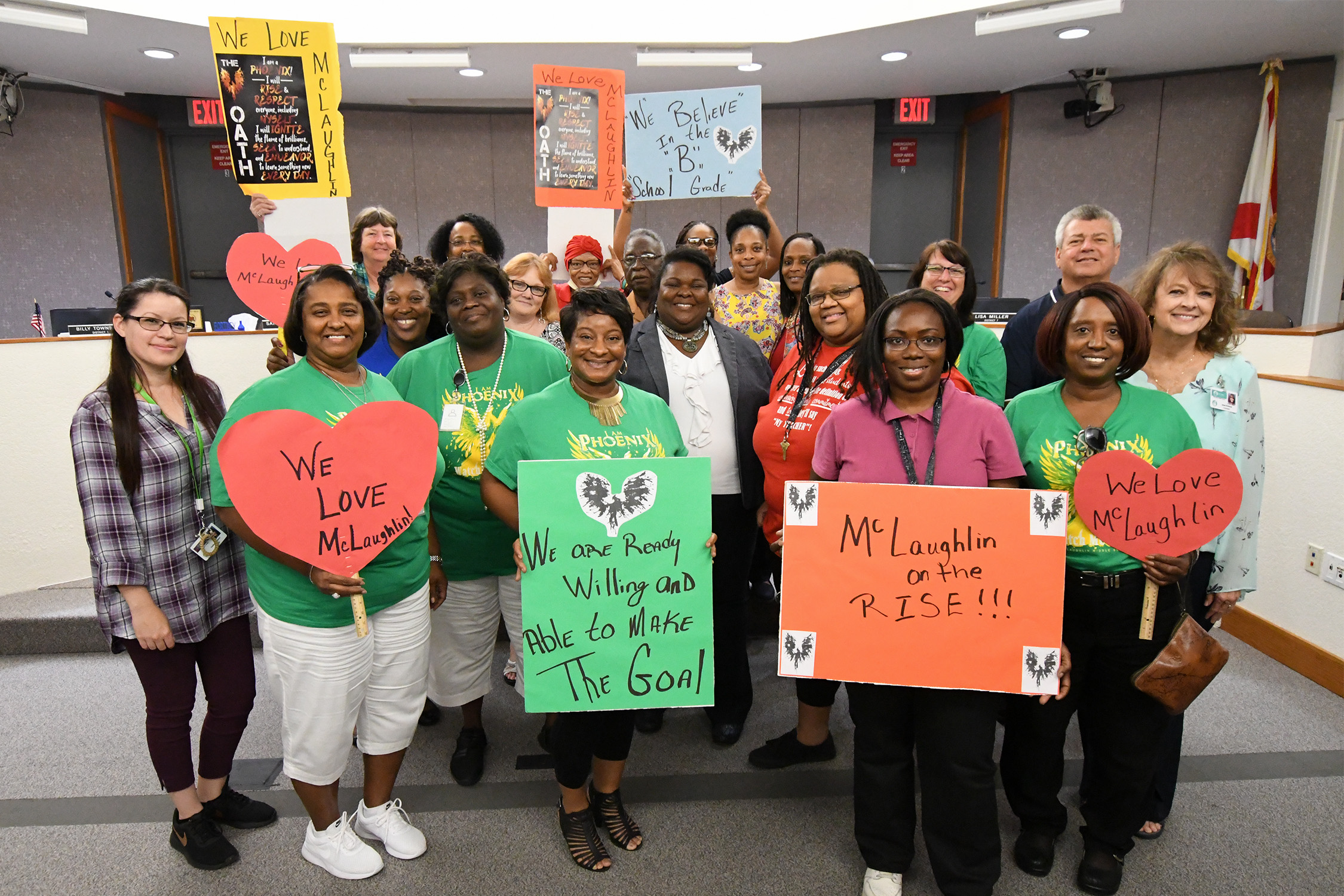 It’s a new school year at McLaughlin Middle & Fine Arts Academy — and it’s also shaping up to be a year like no other.

From the school’s administrative structure to team-building activities for staff members, from strategies designed to cultivate students’ school pride to an outpouring of support from the community, it’s clear that positive change is taking place at McLaughlin.

“It’s a new era,” said Principal Sharon Chipman. “We’re building a team, a culture, and the students’ belief that they can be the best.”

Her return to McLaughlin is a chance to both improve the grade — and public perception — of a school dear to her heart.

“McLaughlin is really a great school. We have wonderful teachers and students,” Chipman said. “To come back and work with these kids and help them means a lot to me. These children need us.”

McLaughlin is one of three PCPS schools currently on a state-supervised turnaround plan to raise its school grade; the school received a grade of D in both 2018 and 2019. The McLaughlin plan includes a number of strategies, including ensuring the school is fully staffed, providing training and ongoing support and an extra planning period to teachers, and more closely monitoring students’ progress.

Another element of the McLaughlin plan: strengthening leadership at the school. Now reporting directly to Chipman, and learning from her at every step of the way, is Acting Principal Debra Wright Hudson, who previously served as an assistant principal at Westwood Middle, another turnaround success story. Westwood earned its third-consecutive C grade in 2018-19; just five years earlier, it had an F.

“Having two principals means we get a powerful mix of experience and excitement. Mrs. Chipman brings several years of experience, and expertise in turnaround schools. Mrs. Wright Hudson brings the enthusiasm and fresh perspective of a new principal. They’re going to do great things together at McLaughlin,” said Regional Assistant Superintendent Patricia Barnes.

“Working side-by-side with Mrs. Chipman is preparing me to better serve our students,” said Wright Hudson, daughter of lifelong educator Clint Wright, who died in 2007.

“It’s a really great system for struggling schools. We make decisions together. Our skill sets complement each other. We work really well together. It’s a blessing for the students because they’re able to see the district cares about them so much and believes in them so much that they’ve given them two people to help them achieve.”

Together, the duo began preparing for their “miracle year” before it even started, Wright Hudson said.

In early August, Chipman and Wright Hudson arranged to take new teachers to Lakeland’s Teachers’ Exchange, where more experienced educators from the school helped them pick out items for their classrooms.

“To have the chance to build relationships and a rapport with other teachers and administrators meant a lot to me,” said Charity Hopkins, who is teaching English language arts at McLaughlin this year.

Her classroom is decorated in shades of blue, grey and black. One of her favorite spots is a bulletin board, where she’s hung a mirror and letters that spell, “Mirror, mirror on the wall, there’s a reader in us all.”

“It feels so homey,” she said. “I get excited when I walk into my classroom.” 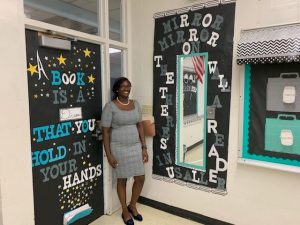 “It was very valuable time, both to get to know the other teachers better, and to have them tell us what will and won’t be useful in our classrooms,” he said.

Chipman and Wright Hudson also reached out prior to the start of school to the Lake Wales community, seeking volunteers to help support McLaughlin. On Orientation Day, the front office was staffed by several former McLaughlin employees.

One of those was Freddie Robinson, a former English teacher.

“When McLaughlin put out a call for volunteers, I answered it,” she said. “This is my former school. I have an affinity for McLaughlin and the teachers here. I hope by having the volunteers here, they feel encouraged.”

Chipman and Wright Hudson also organized a luncheon for staff members, where Superintendent Jacqueline Byrd, Barnes and others expressed their support for the school. 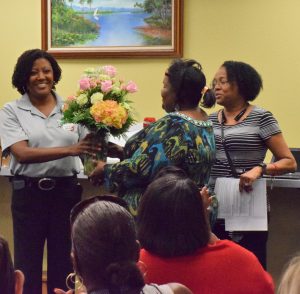 Superintendent Byrd at the luncheon for McLaughlin Middle staff

The co-principals are also taking steps to build student pride and engagement in the school. Students will soon vote on new school colors, staff members are writing an alma mater that will be sung at events, and since the first day of the 2019-20 school year, students have recited an oath that reminds them of the significance of McLaughlin’s mascot, the Phoenix.

I am a Phoenix.

I will rise and respect myself and others.

I will ignite the flame of brilliance,

And endeavor to learn something new every day.

“We’re creating a sense of community, and we’re empowering students to understand the importance of them rising out of the ashes, of rejuvenation and the rebirth that is happening at the school,” Wright Hudson said.

“We’re going to exceed everyone’s expectations. That’s what a Phoenix does.”