At Lakeland High, a New Tradition is Born: The Dreadnaught Wave

At Lakeland High, a New Tradition is Born: The Dreadnaught Wave 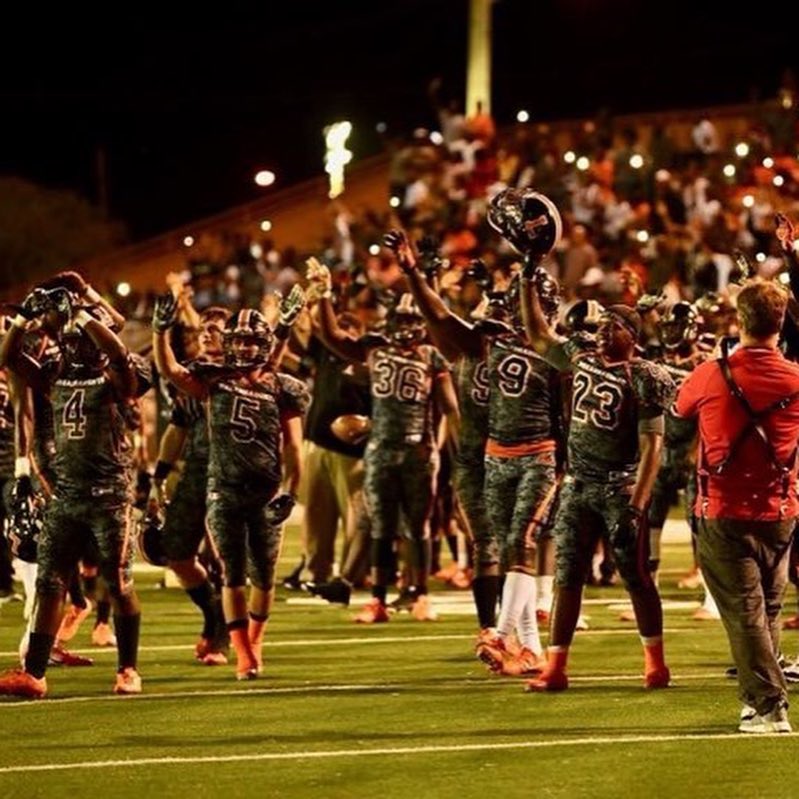 It’s Friday night at Bryant Stadium and the stands are packed once again for a Lakeland High home game.

The first quarter comes to an end: It’s time.

The players remove their helmets and gather on the field. Fans — home team and visitors alike — rise from the bleachers and hold their phones aloft, the screens glowing against the night sky.

The cheerleaders lift their pom-poms. There’s people on their feet in the press box.

The entire mass, a sea of LHS orange and black, faces the building overlooking the stadium and waves together at the windows up on the sixth floor. Standing on the other side of the glass are the children being treated at Lakeland Regional Health’s new pediatrics unit.

It’s called the Dreadnaught Wave, a tradition that’s less than a month old. The idea originated from two Lawton Chiles Middle Academy students — Rylan Bevis and Samuel Roberts — who were inspired by an ESPN segment about the University of Iowa’s Hawkeye Wave.

The Iowa version began last year during the Hawkeyes’ home football games, where fans would turn and wave to the young patients staying in the new Children’s Hospital that overlooks the stadium.

Rylan and Samuel thought about the new Carol Jenkins Barnett Pavilion for Women and Children at LRH, and its proximity to Bryant Stadium. They wondered if the Wave could work here, too, and brighten the spirits of the kids in the hospital.

What would happen if they could see us?

“They just needed an adult to set the wheels in motion,” says Jil Bevis, who is Rylan’s mom and vice president of Lakeland High’s athletic boosters. She sent a message to LRH staff on a Friday and it quickly raced up the chain of command.

By the following Friday, representatives from the hospital and high school had already cemented their new partnership, and the Wave crested for the first time during the Dreadnaughts’ game against Bartow High on Sept. 28.

“We call it the Dreadnaught Wave, but all the fans were doing it,” said Bevis, an LHS alum. “It’s a little overwhelming, to be honest. Every time it is so emotional … there are adults crying in the stands.”

In the short time since its inception, the Wave has expanded to include players and coaches visiting the children at LRH and handing out Dreadnaught souvenirs. LHS is undefeated this year, yet some players have said that their new relationship with the hospital has been the highlight of the season.

“It’s beyond football,” says Lakeland High Principal Art Martinez. “It touches my heart that our players are doing this and giving back to people they don’t know.”

Martinez’s own daughter was born premature and spent several weeks in the hospital in Gainesville years ago. He says the Dreadnaught Wave has personal significance: “The first night we did it, I got chills.”

LRH officials say they have been touched by their new bond with the Lakeland High family. Janet Fansler, the hospital’s chief nurse executive, says the children, teens and families at LRH “feel so treasured knowing they are thought about and cared about during this time in their lives.”

LRH Chief Medical Officer Timothy Regan says the Dreadnaught Wave is “one example of a small, selfless gesture that has such a significant impact on so many.”

Tonight, the Dreadnaughts will face off against South Broward for their final home game of the season. The Wave is expected to take place for just the third time. However, Bevis and others say this is just the beginning.

“When you see it you think we’ve been doing it for years, but it’s because everyone got on board immediately — I mean immediately,” she says. “This has been so well received, it’s part of our tradition now. I hope we’ll do it forever.”

Previous New Polk Program Gets Students into Teaching Careers Faster
Next Transition Services: Helping Students with Disabilities Through High School, and Beyond