At Gause Academy, Victoria Youngblood Finds Support — And Herself

At Gause Academy, Victoria Youngblood Finds Support — And Herself 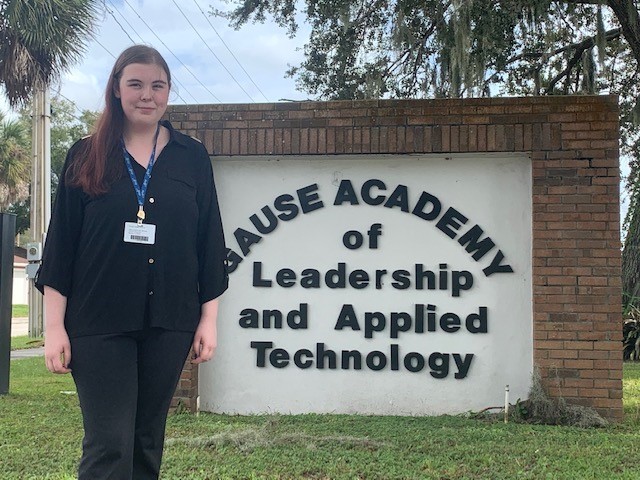 When Victoria Youngblood enrolled at Gause Academy of Leadership and Applied Technology four years ago, she lacked confidence, direction, and belief in her own potential.

Today, she has a statewide award to her name, a growing stack of college scholarship applications and — most important of all — no doubt that she can achieve any goal she sets for herself.

Gause Academy prides itself on helping “the students who fall through the cracks,” said Principal Daraford Jones. Sometimes students enroll at Gause because they are experiencing academic difficulties. Other times, and in the case of Youngblood, it’s that they just need a smaller, more supportive environment in which to thrive.

No matter what brings them to the school, all Gause students enjoy small class sizes — a typical student-to-teacher ratio is 10:1 — and hands-on programs that help them connect their classroom studies to the real world.

Youngblood is quiet and reserved. She had trouble fitting in at her previous school, and her grades were starting to slip. That’s when her family decided to enroll her at Gause, which accepts students by application.

“Here, the classes are so much smaller. I get to work one-on-one with teachers, and they have the time to spend with me and really break down what we’re learning,” she said.

As she built relationships at the school and her academic performance began to improve, Youngblood started making other changes too.

“I’ve become a harder worker,” she said. “I’m still quiet and shy, but I’m building my confidence and learning to speak up for myself more. I have a small group of friends, but I’m a neutral party — I’m friends with everybody.”

Recently, all Youngblood’s hard work — on herself and her schoolwork — paid off when she won first place in personal finance at the state Future Business Leaders of America (FBLA) competition.

“I’m very proud of her. She’s worked so hard to do FBLA and study,” said Youngblood’s mother, Melissa Fischer. “FBLA is helping her to become more of a people person.”

Youngblood’s teacher and FBLA adviser, Melissa Konkol, said she always saw Youngblood’s potential. It was just a matter of helping her see it, too.

“When I first met her, I knew she was going to be awesome, and she really and truly is,” Konkol said. “She is the most qualified student leader I’ve had in several years.”

Konkol is now encouraging Youngblood, who is president of Gause’s FBLA chapter, to run for a state office with the organization next year.

In addition to looking ahead to her senior year, Youngblood is also making plans for college and beyond. She plans to study psychology because she likes to help people — much like the staff at Gause helps her — as well as become a nature photographer.

“I’m excited, and I’m confident in myself,” she said.