At Dundee Elementary, Thousands of Butterflies Honor the Children of the Holocaust

At Dundee Elementary, Thousands of Butterflies Honor the Children of the Holocaust 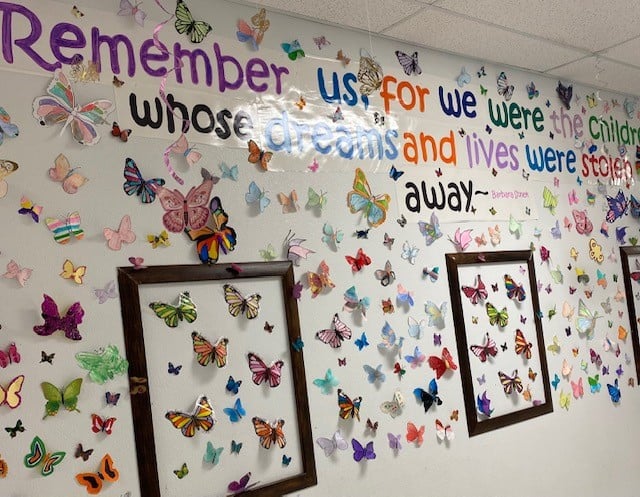 In a hallway at Dundee Elementary Academy, thousands of paper butterflies have found a home.

They blanket the walls in a storm of vivid colors and designs. Each is a symbol, representing a fraction of the estimated 1.5 million children who perished in the Holocaust.

Janine VanCura’s fourth-grade students are responsible for this breathtaking display. After reading Linked by Gordon Korman — a story about a school’s response to anti-Semitic vandalism — the students decided to create their own tribute.

Research led them to the Butterfly Project, an international art and educational program that uses painted butterflies to memorialize the children lost in the Holocaust. The Dundee students shared their project among family and friends, and VanCura posted it on Facebook.

“We received an overwhelming response, so we mailed packets of butterflies out to people around the nation,” she said. “Some staff and classes at DEA also contributed, but the large quantity that we received came from other schools and people across the United States.”

As the butterflies returned to the school, VanCura started putting them up in the hallway. There are now more than 5,000 in total.

On one wall, the butterflies surround a quote written in large, colorful letters — words from the poet Barbara Sonek:

“Remember us, for we were the children whose dreams and lives were stolen away.”