Joe Niemas is the first to admit it: As recently as a few weeks ago, almost nobody knew about George Jenkins High’s ice hockey team.

But that’s about to change.

After nearly two decades in existence, the team finally has its own home venue with the opening of the Lakeland Ice Arena. They’ll face off against Freedom High tonight at 8 p.m.

“I’ve been bouncing off the walls for three days, I’ve barely slept,” says Niemas, coach of the GJHS Eagles. “It usually gets people agape when they hear we’ve put teams together for 19 years without an ice rink in Polk County.”

The Eagles are a club team, and even though they play under the George Jenkins High banner, the roster features students from public, private and charter schools across Polk County.

That has mostly been out of necessity, as Niemas struggled for years to recruit a team of road warriors that played “home” games in Brandon and traveled as far as Oldsmar and Clearwater. He’s proud to say that the Eagles never cut players and even trained complete novices as long as they were willing to strap on skates and learn the game (which is still true today).

Despite those circumstances, the program has managed to survive and even won a state championship in 2003-04. So far this year, the Eagles are 2-1-1 in the Lightning High School Hockey League, which features 18 teams and is owned and operated by the Tampa Bay Lightning.

With the opening of the Lakeland Ice Arena, the Eagles are enjoying rapid growth and a surge in interest, nearly tripling their roster from last year to a current total of 34 players across two squads (JV and varsity). They’re also recruiting freshmen who bring valuable experience from playing on travel teams.

With the Eagles’ blades now firmly planted on home ice, Niemas’ next goal is to expand hockey to other Polk County high schools and hopefully grow the sport enough that teams will have rosters mostly (or exclusively) filled by players from their namesake schools.

But for now, for tonight, the GJHS Eagles are savoring this long-awaited moment.

“When you play a 22-game road schedule, you’re the bad guy in every rink you walk into,” Niemas said. “They no longer have to feel that way. They’ll know what true home support is. We’re expecting at least 300 people tonight, and we’re going to give them a product they’ll be proud of.” 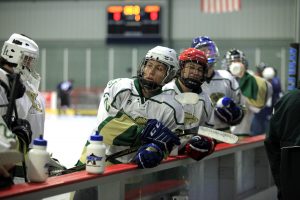 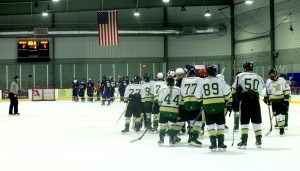